While scavenging for data I came through this dataset which had a list of all the aircraft crashes ( millitary and non millitary ) across the history. I found this data to be very intruguing by nature and decided to explore it more. While exploring the data andtryingto visualize it in Tableau there were some interesting facts that I found . Here are few of them:
1- More than 1 lakh people have been killed in aircraft crashed till now.
2- Maximum number of crashes took in the year 1972 . A total of 104 crashes in the year resulted in death of 2937 individuals.
3- The worst carrier ever in the history of Avaition was Douglas. Douglas was responsible for aroung one fifth of all the crashes in the history which resulted in the almost one fifth deaths.
4- Airbus with the least crashes and least death is the safest Aircraft carrier. 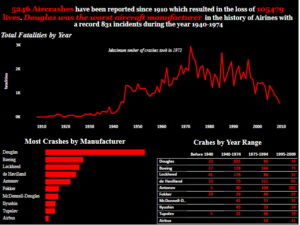