1- Negative Correlation: Two variables are said to be negatively correlated if the value of the correlation coefficient is between 0 and -1. A few examples of negative correlation are:

2- Zero Correlation: two variables are said to be not correlated if the value of correlation coefficient between them is 0.

3- Positive Correlation: Two variables are said to be positively correlated is the value of the correlation coefficient is between 0 and 1. A few examples of positive correlation are:

Positive , Negative and No Correlation on a Graph:

Benefits and Practical Use Of Correlation:

Correlation is, “A statistical measure (expressed as a number) that describes the size and direction of a relationship between two or more variables. While causation “Indicates that one event is the result of the occurrence of the other event; i.e. there is a causal relationship between the two events. This is also referred to as cause and effect.” The classic causation vs correlation example that is frequently used is that smoking is correlated with alcoholism, but doesn’t cause alcoholism. While smoking causes an increase in the risk of developing lung cancer.

Correlation In Tableau:
The classical formula to determine the correlation between two variables is

Which in the language of tableau can be written as 1/(SIZE()-1). The size function in tableau tells us about the sample size.

The next part of the formula is

Step 1: Build our View
Lets  open our tableau workbook and use our default Data set “Sample Super Store” data.
Once we have our data connected, drag the measure Sales to column and Profit to rows. Place Customer Name on the details mark. Drag the dimension Segment to column in front of Sum(Sales) which is already present in the column.
Your view will now be as under: 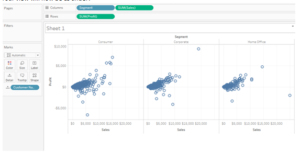 Let s go ahead and create a calculated field to compute the correlation coefficient as under : 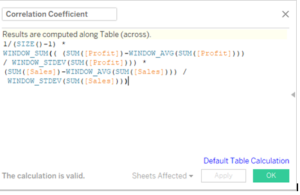 Next drag this field to color and compute it across Customer Name. Our view will now be as under: 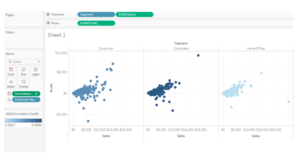